Call for Papers: Clausewitz as a Practical Philosopher 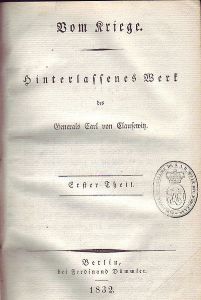 Clausewitz, still perhaps the most important and referenced theorist of war, was deeply influenced by the thought and philosophy of his own time. He was acquainted with Wilhelm von Humboldt and may have known his concept of grammar; he attended the lectures of Alexander von Humboldt on new developments in natural sciences; and he was present at the lectures of the romanticist Henrik Steffens, whose published volume about anthology concluded with an emphatic praise of the trinity, which eventually became Clausewitz’s final concept. It is also reasonable to believe that Clausewitz was aware of Hegel’s lectures, who was his contemporary in Berlin and lived just a few streets away from him. Clausewitz further attended the lectures of Kiesewetter, a student of Kant, but who nevertheless simplified Kant in his lectures at the War Academy in Berlin. Finally, Clausewitz wrote a letter to the philosopher Johann Gottlieb Fichte, which indicates that he was at least aware of his work on Machiavelli (all references in Herberg-Rothe, 2000).

Although Clausewitz rejected an abstract philosophy of war, he highlighted that his approach was a philosophical attempt to understand war – in his concept of the floating balance he even hypothesized an understanding of war, which is not concentrating on the unchangeable fundaments of war, but is highlighting transformation and change itself. This can be exemplified by saying that at the end of his life he did not think in terms of particles and their composition but in terms of waves.

So there is a rationale to engage with Clausewitz not only as a theorist of war, but also as a philosopher. Nevertheless, his thinking was so closely related to the relation of theory and praxis, that he did not write an explicit philosophy, but used philosophical approaches for practical purposes and analyses. Although Clausewitz’s recommendations for the conduct of war were either doubtful or taken as absolute by his uncritical adherents, he was a practical philosopher.

The aim of this special issue is therefore to deconstruct the philosophical seeds of his writings. This is important as we are witnessing a new revolution in warfare which in terms of thinking is always related to his ideas – either by acknowledging or rejecting his actuality. A vivid example is the discourse about hybrid warfare which can be traced back to Clausewitz’s wondrous trinity, an essentially hybrid construction. Therefore, as philosophy should not be just an abstract endeavor, by elaborating the philosophical foundations of Clausewitz’s theory, this special issue aims to contribute to a better understanding of the ongoing transformation of war and violent action in a globalized world.

Suggested topics include, but are not limited to:

- Interactions to the extreme, past and present
- Revolution in military thinking in Clausewitz’s work
- Towards a social-philosophy of war based on Clausewitz’s conceptualization of violence
- Clausewitz and education (Education as philosophy
– Clausewitz, Schiller, enlightenment and romanticism)
- Hybridity, paradoxes, wondrous trinity and the dialectics of defense and offense
- Clausewitz and his exchange with Fichte
- Plato and Clausewitz (about the causes of war?)
- Clausewitz and the rationale of probability and chance
- Are there rules for orchestrating hybridity in warfare? Clausewitz as a starting point, not already the solution?
- The tension between technique and method versus the primacy of politics
- Politics/policy as separated realm or an holistic concept
- Instrumental view of war versus war as a kind of praxis
- Clausewitz’s and Sun Tzu’s way of thinking
- Clausewitz and the Thucydides trap – implementing fear in practical philosophy
- The absolute and the ideal war – beyond Max Weber’s ideal type
- Purpose, aims and means – a hierarchical conceptualization or a floating balance - in search for a different rationale.

Abstracts should be sent to Andreas Herberg-Rothe (andreas.herberg-rothe@sk.hs-fulda.de) and Andreas Wilmes (the editor-in-chief of the journal) (andreas.wilmes@trivent-publishing.eu) until the 1st of July 2020. Decision notifications will be sent by the 15th of September. The full papers should be submitted by the 15th of January 2021. The length of the contributions should be between 8000-12000 words. Upon abstract acceptance notification, we will inform you about the style sheet.