If the War Comes 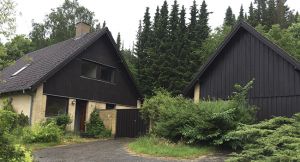 "If the war comes" (‘Hvis krigen kommer’) was the title of a pamphlet distributed by the Danish Prime Minister’s office to every single household in Denmark in January 1962, instructing the citizens of Denmark about how to prepare for and act during a possible nuclear attack. It is also the title of a joint research project between Aalborg University, North Jutland Historical Museum, Cold War Museum Langeland and Museum Stevnsfortet funded by the Velux foundation and the Ministry of Culture, Denmark (Slots- og Kulturstyrelsen).

"If the war comes" researches the history of Danish nuclear culture, including civil defense in Denmark, and not least the history behind the building of REGAN Vest. The construction of the government bunker REGAN Vest was completed in 1968 and until the end of the Cold War REAGAN Vest served as the main shelter for the Danish government and the Royal Family in case of a nuclear war. Preparations to fight a nuclear war, including civil defense measures, had a material side, and some of the facilities are in the process of becoming part of danish national, cultural heritages. This of course raises salient questions about how to exhibit a war that luckily never took place and therefore only was an imagined war.

The organisers invite colleagues who share an interest in civil defense and the cultural history of the atomic age to contribute to and participate in this international workshop.
The organisers welcome papers that explores
- Public interaction with the state regarding civil defense and the threat of nuclear war. Public interaction spans uniformed service as well as peace activism and other civil society activities, and may have a national as well as a transnational or international perspective.
- Government and civil shelters as Cold War cultural history, including the material history of civil defense as well as the psychological preparedness and public campaigns to prepare for and act during a possible nuclear attack
- Nuclear Cold War technology from a science and technology (STS) perspective
- Theoretical aspects of writing the history of past futures (imagined futures) in a Cold War setting
- How to exhibit and narrate Cold War civil defense and civil society history

Paper proposals should not exceed 300 words and should be submitted through the home page https://www.en.cgs.aau.dk/research/conferences/ifthewarcomes.
Please indicate which session you think your paper belongs in.

The organisers intend to publish a collected volume focusing on comparative and transnational aspects of the conference themes.